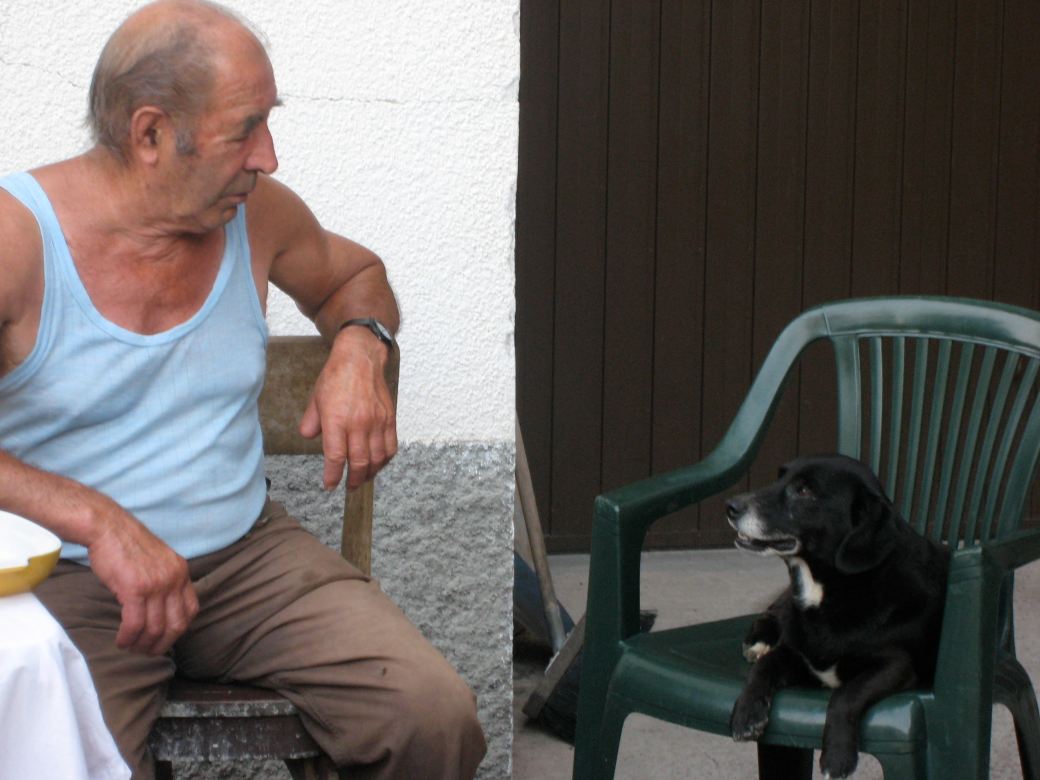 Heading into August, it hadn’t been as hot for years. The restless elevation and swirl of humid mountain air kept the Belluno valley still very green (short, sharp rains cascading like fractured water mains), but the temperatures hit the high thirties and stayed there. Everyone talked of the heat wave. Blue skies dominated by a ratio of ten to one.

Ernesto, the alcoholic cowman who propped up the bar every night it was open, died earlier in the summer in his early fifties. He appeared a gently benign character, but we never really knew him beyond the formal hellos, goodbyes and his position at the far end of Giusy’s establishment. Another, much older, stalwart of the Co-operativa, Angiolino, with his bulbous, pirate’s nose and bright watery eyes, also went recently. Years ago, one staggeringly cold morning, he patiently produced antifreeze in a plastic squirter, as one of our visitors tried frantically to leave for the airport in an ice-clad car. Lucio, snow-haired, charismatic and our avuncular neighbour across the fence has had a serious brain tumour diagnosed. He is wheelchair bound, undergoing all the tests and – limited – interventions possible, a shadow of his previous self. His glamorous, sophisticated wife Maura is already talking of selling up and going, while their house teams with their children and grandchildren, muted to solemnity in difficult times.

Most affecting to us has been the death of Egidio, the head of the Dal Farra house opposite us in the courtyard. He died the day before I arrived. It’s not absolutely clear what carried him off, but he’d been battling a blood and enzyme deficiency thing for a while. Last time we saw him in February, he was heading in and out of hospitals, but was still his same self. He was eighty.

One would have to describe him as a peasant farmer. He also, always, struck me as canny, resolute, hard working and the sage statesman of a successful family empire. I doubt they ever had any money in the bank, suspecting instead that most of it sat in a mattress. Our friend Ciccio (Joss’ godfather) was always convinced that, from both the buildings they owned and also the parcels of land he farmed so assiduously, Egidio and Cesarina Dal Farra were millionaires. You couldn’t accuse them of living the millionaire’s lifestyle.

We have bought cheese, salami, eggs and veg from them for the ten years we’ve been coming to Cirvoi, paying euro by euro as we went. One of the best pieces of advice we were given, when buying our house, was never to leave a debt unpaid to a neighbour. Cesarina has always played imperious cashier, carefully accepting notes and coins from all and sundry with vague protest and delighted cackles.

Our days would start, invariably, with the sound of an Egidio hawk and spit, around the time of the church bells at 7am, before he addressed the dog with brief and muttered urgency. More days than not, he’d crank up some venerable machine or other and leave it thudding explosively in the courtyard for ten minutes, finally heading out to one field or another. If it were the tractor, Flipper or later Lucky, would accompany him by his side. Dressed impressively in short wellingtons and either jauntily branded overalls or a vest, he would peer out from below his porkpie hat.

He never spoke Italian, only dialect. He and I would exchange brief hellos and talk of the weather. These chats would involve him gesturing vaguely at the ground with a hand missing various digits from agricultural accidents, as he declared with admirably accurate conviction what would befall the skies that day. There would follow a lot of teeth sucking, quiet grunting and exhalation before the concluding sigh of ‘Ehhhhhhh ben…Se vedon!’ the dialect word for goodbye (for now). If I went to see him in his cheese and salami shed, or in the kitchen with Cesarina, he would insist we drank a ‘cin’ of thin red wine from thick glass tumblers, even at 9 o’clock in the morning.

His funeral on the Saturday after my Friday evening arrival was held in Castion. It’s the bigger village below Cirvoi, on the way down to Belluno. The impressive, simple church was packed to standing room only. The shocked family trailed in after the coffin, the men in sunglasses. The priest spoke gently, a familiarity in his tone registering proper, intimate knowledge of his subject. At the conclusion, we watched the entire congregation file up the road towards the cemetery afterwards, for the interment, perhaps three hundred people.