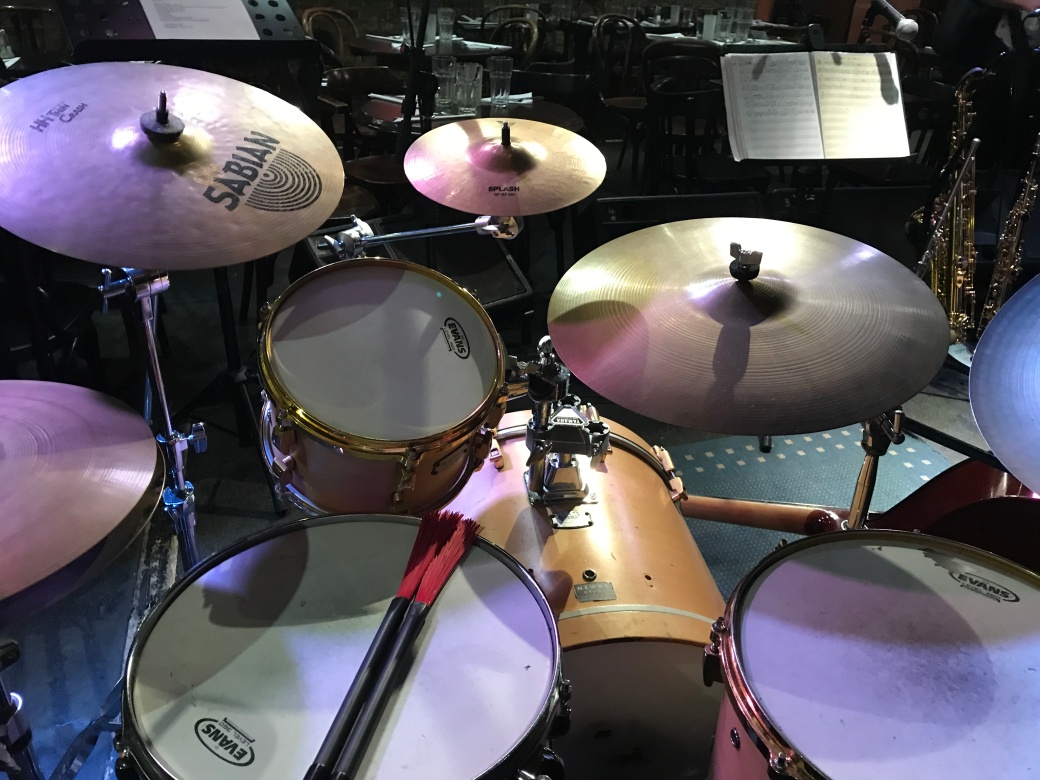 For the last nine years, we have played at the 606 Club in Chelsea at least once a year.  2020’s events have meant delaying our tenth anniversary appearance.  The Philip Dodd Quartet’s adoring public – long suffering, charitable and wonderfully patient – might secretly be rather relieved.

Our first ever concert was in the Spring of 1980.  A student band, we played in the music room of Jesus College, Oxford.  (Our saxophonist, Paul Mason, was to join us a year later.)  These days we stay more or less in the same musical bar together. Back then, as if on a raggle-taggle pub-crawl,  we visited the same bars but often at different times. I’ve always been grateful that improvised music is so forgiving a medium.

I would hit things as a child.  Oil drums.  Biscuit tins.  Pillows.  I loved the thud.  The percussive rallentando of two sticks dancing to different pressures in my hands was a joy.  I dreamed of snare drums and shiny metal fixtures.  I would keep a rolling, chattering drum beat going with my teeth during lessons.  With the £100 my grandmother left me, I bought an ageing and ill-matched white drum kit from a second-hand store in Cambridge. My parents suffered the noisy consequences with resilience.

At school, I was especially inspired by the drummer in the talented and avant-garde Keith’s Mum.  They were a remarkable four-piece rock band; inventive and accomplished.  Alasdair Palmer is a now a celebrated parliamentary speech writer, journalist and commentator.  Back then, he was my idol.  On Saturday afternoons, I would run from lunch to the music school and hammer away on a scrap merchant’s array of percussive wood and metal for hours on end. I wanted to be as good as him. My loss of hearing can’t just be put down to genetic inheritance. It probably dates to those prolonged sound storms.

Towards the end of my school career, I drummed for untidy rock bands where musical careers other than mine were born.  I missed my entrance cue during Glen Miller’s In The Mood when playing for the school brass orchestra, embarrassing in front of so many parents.  My compass was always feel and instinct, rather than sight reading and logic. In the holidays, I would stand for hours in Percy Prior’s in High Wycombe’s Octagon shopping centre, staring at hi-hat cymbals with lovestruck yearning.  I was infatuated with their golden glimmer.

I became a student.  A student with a drum kit was suddenly currency.  I was in demand.  For Kevin Duncan’s early, punky Inrage concerts, I scrabbled away playing three minute wonders in slightly less than two.  The beautiful Rebecca Willis still managed to enunciate every word, her waterfall of fabulous hair diverting attention from the runaway train of our time-keeping.  For Adam Blackburn’s The Alicats, a cocktail jazz ensemble, I measured out my quiet taps like an anxious Swiss chemist, desperate not to lose the formula of counting up to four in a Frank Sinatra song. In the septet funk band, Straight No Chaser, I relaxed and learned from brilliant players. Two of them went straight to the Royal Academy on musical scholarships.  Audiences rose happily to our renditions of Stevie Wonder, Bill Withers and Average White Band numbers. I met Rick Bolton, the guitarist, who still teaches the instrument, in Ealing Common post office the other day, after a gap of four decades.

It was with the Philip Dodd Quartet that I found my metier.  Here was a band where the casual observer might think that the piano, double bass and saxophone were following the drummer’s timing.  In actual fact, it was entirely the reverse.  Forgiving and experimental, playing with Philip, Graham and Paul was a glorious liberation. In conversations without words, my role was to listen, create empathetic connection and to highlight, almost as a thought was being enunciated, the musical expressions of my band mates, whilst keeping something vaguely approaching a beat. I didn’t fulfil my job description very often, but when all the bits were working, it was intoxicating.   Despite occasional sabbaticals, some of several years, we have rehearsed and performed around four or five times a year since that first appearance.

In jazz, there is always the question of the drum solo.  Some people love them. I’ve never, really, been a fan.   I’d rather hide at the back, obscured by cymbals, contributing but not standing out. A paralysingly unassuming nature is the enemy of extrovert display. As a teenager in the 1970s, listening to all kinds of music, we were supposed to worship Carl Palmer’s technical tsunamis as he rotated on his stool around a strobing kit in the middle of some Emerson, Lake and Palmer onanism or other. I couldn’t see the point.  Neil Peart of Rush (I hated heavy metal but admired his musicality) was more interesting, but I still found the solos a bit dull.   Cozy Powell was a drummer who couldn’t muster up a proper band and was left bashing away to fill out their absence. Drum solos, to me, were the bit where other musicians took a break and the audience got bored.

Regarding jazz musicians, I went to see Elvin Jones (of John Coltrane fame) and Eddie Gladden stoking Dexter Gordon’s boilers, both at Ronnie Scott’s. I listened carefully to Jack De Johnette on record.  Most remarkably, Philip introduced me to the Norwegian Jon Christensen, one of the ECM label’s giants and drummer of choice for Keith Jarrett.  I spoke to him once, with Philip, for a few moments at the Bracknell Jazz Festival, when he was touring with Miroslav Vitous. A performer of subtle, exquisite genius, he could paint light with dabs of a stick and sweeps of a brush like no-one I had ever heard. He remains my all-time favourite player.  My pale, attempted imitations of his style weren’t just faint but woefully see-through.  Trying to emulate his skill in a solo was futile.

In PDQ concerts, I would baulk at the prospect of solitary exposure, perhaps trotting out one hurried and rather grudging whizz around the skins during a concert.  Even nowadays when Paul, the saxophonist, raises an eyebrow and holds up his fingers to suggest swapping fours in a tune’s closing furlongs, I still find myself hesitating.  The three of them understand. 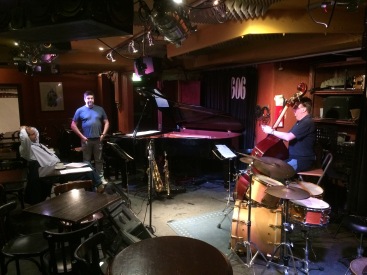 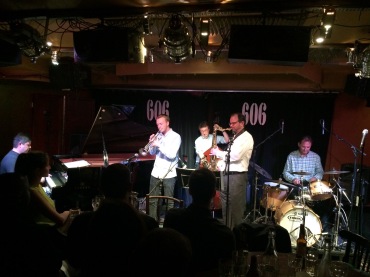 Solos do happen, nevertheless.  Confidence can get the better of reticence. Those I tap out are never perfect and never will be, but they occasionally, sort of, work. Here below is an unmastered recording of us playing a Nicola Conte tune, Nefertiti, at the 606 in 2012.  There are plenty of glitches in the very live and very raw capture.  We’re relaxing at the end of a set and it shows.  But there’s something of the best of us – a determinedly amateur band with pursuits in other directions – hidden in there somewhere. 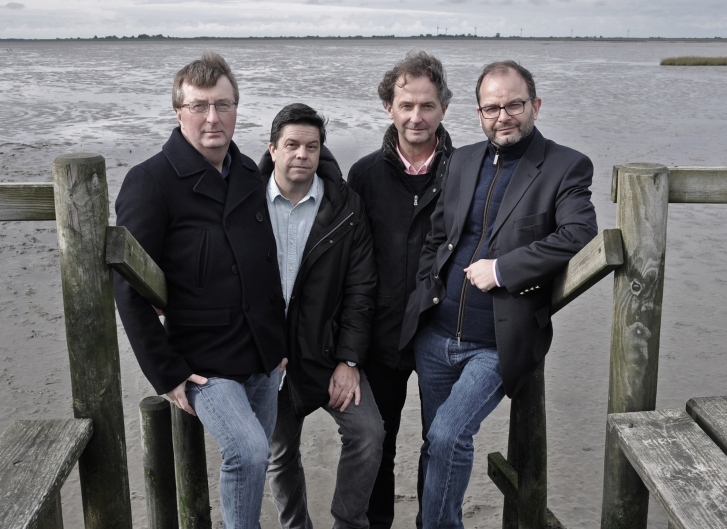