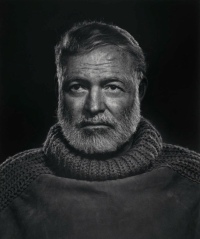 A tourist walks into a remote bar in the Everglades and spots Ernest Hemingway.  Falling into conversation with him,  the tourist asks, “How short can a short story be?”

“Six words,” replies Hemingway.  And he writes, on a napkin, the following:

Except that there are several versions of how the story came to be.  One suggests the great writer challenged others at a lunch at The Algonquin to create a six word story. Another  that he produced it as a result of a bet . Go digging – not hard with a browser – and one finds the same, very short story was in newspaper circulation when Ernest Hemingway was only ten.

The version he is supposed to have written never actually happened.

But it’s an incredibly powerful myth.  There are now whole websites dedicated to six word stories (http://www.sixwordstories.net/category/site-news/). The genre of ‘flash fiction’ has grown from an idea about unsold infant footwear. Challenging someone to capture a full narrative with a handful of words and then triumphantly proving it possible with the ‘For Sale tale’ is irresistible.

Myths are a powerful weapon. Stalin put it about that Georgians lived longer than anyone else on earth. The ‘reason’ being that it was thanks to their diet.  The USSR, force fed this news by the State,  believed it.  Expectations for the longevity of their Georgian leader soared as their hopes sank.  Mohammed Ali’s approach to the Rumble in the Jungle – topical as pleas for his British ennoblement boil forty years later – was to create a myth that George Foreman swallowed wholesale. The version of himself that Ali then presented in the ring was so different, it undermined any pre-established narrative. Ali won famously.

Writing about another mythic invention, Robin Hood,  in the London Review of Books, the author James Meek says:  “Myth is a story that can be retold by anyone with infinite variation, and still be recognisable as itself…It is an instrument by which people simplify, rationalise and retell social complexities. It’s a means to haul the abstract, the global and the relative into the realm of the concrete, the local and the absolute… If those who attempt to interpret the world do so only through the prism of professional thinkers, and ignore the persistence of myth in everyday thought and speech, the interpretations will be deficient.”

Our family grew up on stories my father told. They were frequently mythical, often fantastical. We had no way of proving them true or otherwise. He often spoke of our relations. Our maternal grandfather, in particular, inspired a one-man Aeneid of far fetched tales. Sadly I never met him.

One particular story has stuck with me.

Our granddad won an accumulator bet in 1922, worth millions by today’s standards. In the years that followed, he blew the lot. One adventurous purchase was a coffee plantation in what is now Zimbabwe. He took the family to live there and my mother was schooled in Harare (then Salisbury), until the coffee crop failed in 1936 and they moved to Zanzibar.

In the early days on the coffee plantation, they were plagued by a troop of chimpanzees. When chimps put their minds to it, they can be incredibly destructive. Huge areas of coffee bushes were being torn out of the ground and the crop was being lost.

It being the early 1930s, my grandfather arranged a shoot.  The neighbours joined him, so 16 guns set off, in search of the chimpanzee vandals.  My grandmother went along too as the only woman.

They walked for some hours and, eventually, tracked down the troop.  There were about 30 creatures, happily playing games of total vandalism.  So absorbed were they yanking coffee bushes out of the ground, they failed to notice the encircling men.  My grandfather raised his rifle.  His 15 companions followed suit.

Too late, the chimps realised something was up.  There was a stand-off moment. In that brief pause, one female chimp nursing an infant, stepped very pointedly towards my grandmother. The ape carefully placed her baby down in front of the only woman present, before stepping back to join the other chimpanzees, seemingly waiting to be shot.

In that moment, my grandmother called out. She said something as simple as, “You can’t do it”.  The guns stayed silent and were lowered.   After a few moments, the mother chimp shuffled forward and picked up her baby. The circle of men parted.  The whole troop filed out past the shooting party and away.

The chimpanzees never came back to the plantation.

My father told us this many times over the years, with theme and variations.  Thinking about it now, I believe something like that may have happened, but if it’s not pure myth,  I’m sure it’s heavily mythologised.   Nevertheless, it meant something very powerful to us children. It may not have been the truth, but it spoke – and speaks – of much broader truths. I will never forget it.

Back in the world of six word stories, I continue to come across them in all manner of places.  Writing them is a good exercise to set in workshops, simultaneously demanding compression and expansion in the minds of the participants.

Not so long ago, I was marooned in a huge, windowless room in Istanbul for three days with over 300 people from the same agency network.  At one point, we were broken down into smaller groups and frogmarched through all manner of tasks, challenges and tests.  The light relief was when the speaker asked our crowd of around forty people to try coming up with a six word story off the top of our heads.

There was a brief silence among the cabin-fevered, light-deprived people assembled until a dryly laconic, unmistakably Australian and very male voice lobbed a thought up towards the stage:

“Convent life.  Worth the sex change.”