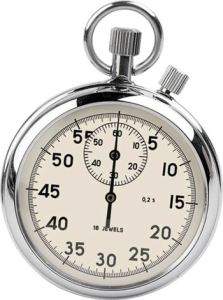 Once upon a time, British TV commercials were 45 seconds long.

They were other time lengths too, but the 45 second TV ad was a very particular animal. A look at both Collett Dickinson Pearce’s work and also Alan Parker’s commercials supports this emphatically  (http://alanparker.com/earlywork/advertising-and-commercials/). It may well be the reason British advertising was so celebrated in the sunny 1970s.

Has there ever been a better vehicle in which to tell a story?

Forty-five seconds allows for the classic gag. The triptych with a payoff. The extended play with time for the rug pull. An Englishman, a Scotsman, a Welshman, a punch line and a pack shot. It all fits in three quarters of a minute. The timing is just so.

Enjoyment, branding and memorable impact served up without truncation. Outstanding.

It’s not that there’s anything wrong with other time lengths, by the way. John Webster’s ‘Points of View’ is a peerless example of 30 second brilliance for The Guardian. And whatever the length, there’s no denying the importance of the idea, the talents of the writer, art director, director and cast and their contribution to how engaging the final concoction. It’s just that 45 seconds allows for more cultural play and richer character development. More profligate of budget, perhaps, but friendlier. More resonant.

According to some research company or other, the statistic back in 2006 was that a 35-year-old in Britain had watched 106 days of television advertisements. That’s 24 hours a day, seven days a week. Desperately trying to remember any of them would be hard enough. The layering and richness of 45 seconds would have edged many, if not most of the 30s. (In a different medium, in their era, the 45 triumphed over the 33rpm disc in terms of sales and mind space.  But that’s another story.)

There are classics of the 45-second era that show so many others more readily divisible by ten a clean set of heels. Broadcast media that, on its day and in the right hands, had the audience leaning forward, not sitting back. Yes, commercial telly had more of a monopoly then but yes, these were evidently loved into creation by careful minds with a beady eye on the second hand of the clock.